What is the Difference Between TXMAS and BuyBoard?

Many small businesses looking to grow their State and Local government sales have come to us asking, “Which is better for my business, TXMAS or BuyBoard?” The answer will vary depending on what you are offering, to whom you are trying to sell and when will you be ready to sell it. Of course, the option for one does not negate having the other. Below you will find some descriptions on what it takes to get on TXMAS or how to be part of the online purchasing cooperative BuyBoard.

Requirements For TXMAS VS. BuyBoard

To qualify for TXMAS, a company must first have an existing multi-year contract with a Federal, State, or local unit of Government that has been in force for at least one year. Usually, vendors will use an existing GSA Schedule to fill such requirement; however, BuyBoard will only satisfy this requirement.  Additionally, TXMAS wants to see your revenue through the base contract for the last two years, if available. In contrast, BuyBoard does not require an existing contract.

*Remember that IT products are excluded from TXMAS, as they are sold the Texas Department of Information Resources (DIR), which publishes its own rotating schedule of solicitations.

In lieu of an existing multi-year contract with the Government, BuyBoard requires a company to provide five past performance examples with dollar value, description of deliverables and reference contact information.  TXMAS will use the base contract as proof of past performance and requires a spreadsheet of all sales through the proposed base contract for the last two-years. In addition, the pricing for the contract must be publicly available.

TXMAS is a continuously open solicitation and may be the reason it seems to be so popular with government contractors who want to do business with Texas agencies. BuyBoard contracts are cyclical and have a definitive opening schedule for contracts.

BuyBoard and TXMAS sell to some of the same classes of customers, particularly the SLED (State, Local and Educational) markets.  TXMAS will reach various agencies and entities (1525 Members) within Texas. While BuyBoard, through the National Cooperative, can potentially include any access to nearly all State and Local Governments, as well as non-profits and educational institutions nationwide (6166 Members).  A company may select the specific areas with capabilities to serve. 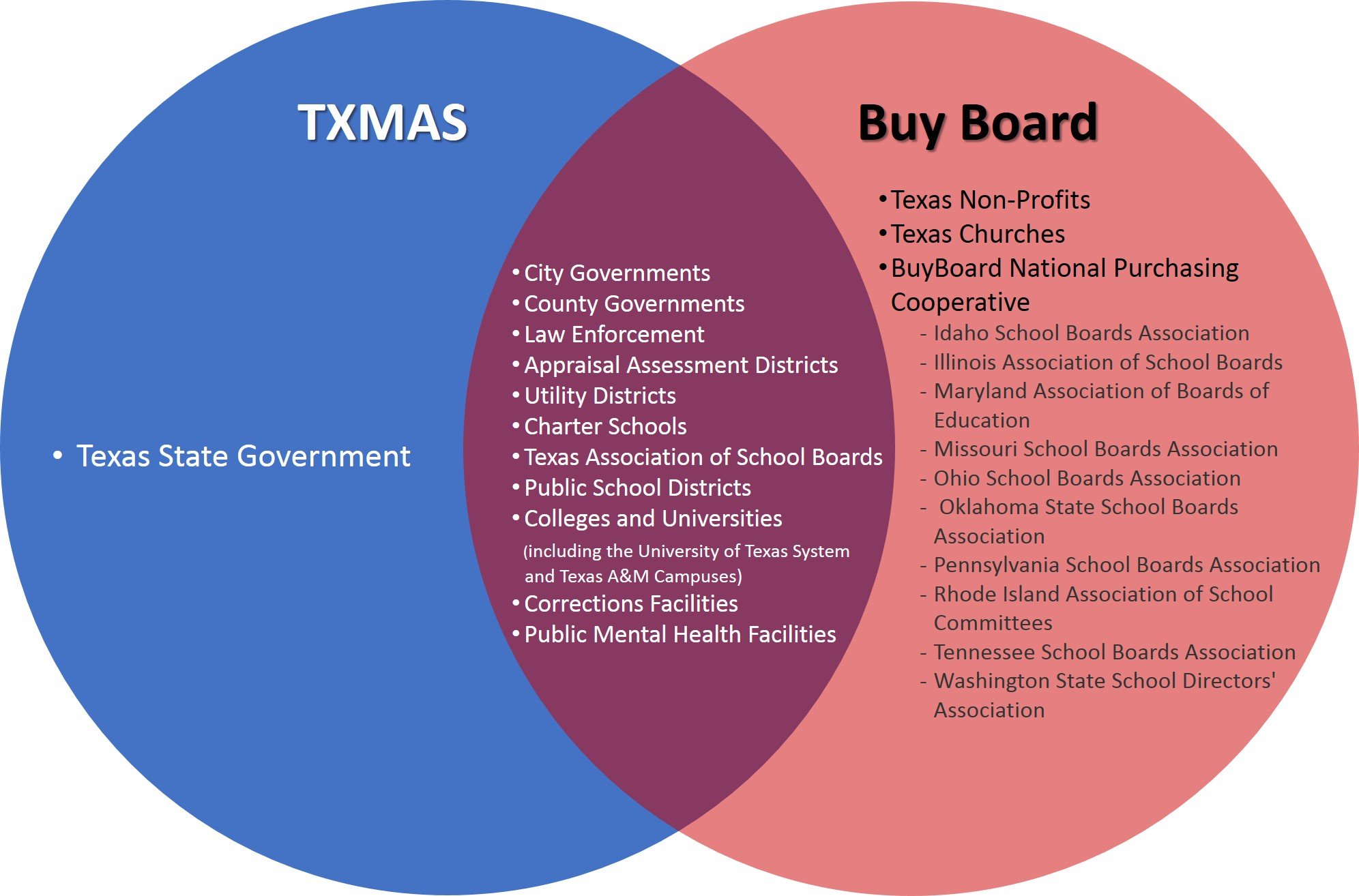 Historically, the approval time for TXMAS had run between 3 to 6 months.  However, recent changes to their processes, including application form, requirements and online tools, have increased the time frame for award to between 6 and 9 months, sometimes up to 12 months.  When submitting, a vendor does not know exactly when an award will take place.

As BuyBoard has stated open and close dates, they usually take 4 months to award from submission to award and clearly state when awards will take place.  For example, submittals that are made in July will be awarded by October of the same year.

What is Your Businesses’ Best Path Forward.

If you have a SLED customer, ask them if they have a preferred contracting vehicle or if they are open to other paths for procurement. Some customers may prefer TXMAS, but will accept BuyBoard as they both are a proven means to an end.

Occasionally there may be some training involved to help your buyer understand an unknown contracting vehicle.  We have helped many clients over the years navigate these procedural waters; but both TXMAS and BuyBoard have representatives that can directly work with your customer to make purchases.

BuyBoard Resources for your customers:

TXMAS Resources for your customers:

How does this contract fit into the company’s long-term government sales strategy?

Whether it is BuyBoard or TXMAS, neither contract is a guarantee of sales. Your sales and marketing team or the CEO wearing every hat must look at customer mix and define which customers can best be served with your product or service.

If there is an open BuyBoard solicitation, you may want to pursue that path immediately, as the BuyBoard may be the base contract needed to win a TXMAS.  If you have a GSA or other applicable contract, you just may want to go directly to the TXMAS and wait to see what other channels can be opened.

We would be happy to look at your product service and help you determine if either of these contracts are a good fit for your success or if your company is better suited for one of many alternatives.

A few of the other popular government contracting vehicles (there are MANY more) include:

How we can help?

You have Successfully Subscribed!

You have Successfully Subscribed! Someone from Coley will be in contact with you shortly.